​
In March, the 29th 2018 we have a new lineup, Francesco Di Battista replaces Luca Ghiglione, who decided to leave the band dued to personal reasons.
We propose a modern, dark-sounding heavy metal with clean vocals, multi layered guitar sections, and pounding rhythmic parts. Influences are many (Judas Priest, Nevermore, YJM to name a few), but we strive to have our own identity. Debut CD "Hollow Man" is in the works and will be released via Mighty Music on the 10th June 2013. Our second CD "Cosmogony" was published in February 2016 by Diamonds Prod. Records, you can listen this new works on www.bandcamp.com. You can download our Press Kit in the Downloads page. Stay tuned! 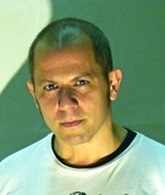 Fabio CARMOTTI - Vocals
Biography: I was born in Savona in August 1965 but I've always lived in Genoa. I'm a veteran of the local rock and metal scene, having lent my voice to a lot of bands.
Normally I don't talk about myself, I just let others doing it. Good friends are few but always present in difficulties... I thank all true friends, the ones that really matter. 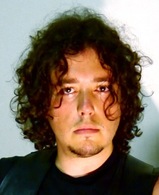 Andrew SPANE - Guitars
Biography: I started playing guitar when I was 9 years old. I had the absolute luck to have Vittorio Centanaro (best known for his collaboration with the world-renowned italian singer/writer Fabrizio De André) as my first teacher. He introduced me to classical guitar and helped me developing my basic skills. Later on I had various teachers with whom I moved to blues (both electric and fingerstyle); then I moved to heavy metal and I went on as a self-taught musician.
I took part to various projects until I decided to create my own and I founded Graveyard Ghost back in 2003. After some demo CDs we finally signed a record deal for releasing our debut full length ("Omega", 2007 Steelborn Records) that unfortunately had a limited distribution and visibility despite the generally good reviews.
After some years of low productivity it was clear to me that Graveyard Ghost had to end and a new project had to begin. So this is how No Man Eyes started.

​Alessandro Asborno - Bass Guitar
Biography: I started playing guitar when I was 11 and I decided to go on as a self-taught musician.
I created  various “metal bands” in the beginning, my only inspiration was the great MAESTRO YNGWIE MALMSTEEN and all power metal bands as HELLOWEEN, GAMMA RAY, STRATOVARIUS and others...
During summer 1997 I decided to start studying more seriously with Maestro Palamenghi (AELIAN) and I started learning jazz-guitar.
After some years of study and concerts, I had the opportunity to play bass guitar on new NME material, and I found it very exciting.
We are at the beginning of a new adventure!

Francesco Di Battista - Drums
Biography: It all started with this kid drumming on books… My first teacher was Giuseppe De Paola, while I got my K.O.S.A. certificate under the guidance of the American teacher Aldo Mazza. As a drum student I was often involved in many projects, such as organizing seminars featuring guests such as Niko McBrain, Gregg Bissonette, Virgil Donati, George Kollias, Derek Roddy and Raphael Saini among others. Meanwhile I kept on taking private lessons hosted by Derek Roddy, George Kollias and James Pyne as well as joined  Mike Mangini on 3 master classes and a clinc, also attended by Riccardo Merlini, whom I’ve always looked up to… Later on I took care of more seminars and studied bass drum and marches with Mario Della Casa. At the very moment I’m working on my own also as a drum teacher.

Michele Pintus - Drums
Biography: I started playing at 14 on my brother's drumset. I am mostly a self-taught player, only during the last years I have been taking private lessons with John Macaluso (YJ Malmsteen. Ark...) and other professional drummers that radically changed my style, especially considering dynamics. I continuously study on various methods trying to improve as much as possible. In 2010 after having played and recorded demos with some bands I was looking for something more modern with a sound closer to Nevermore, at the same time Spane was looking for a drummer, so we started playing together and the rest is history :) 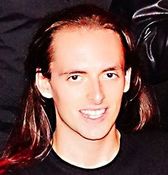 I was born in 1997 and started playing drums at the age of 12 under the guidance of Francesco La Rosa (Extrema, Meganoidi), initially learning rock and metal drumming and then moving to other genres like jazz, funk, pop, etc. During these seven years I attended clinics of Derek Roddy, Dave Elitch, Thomas Lang, Chris Coleman and Mike Mangini; I also studied with the latter and with Virgil Donati at their respective drum camps. Currently I play drums for symphonic metal act Winterage and No Man Eyes.